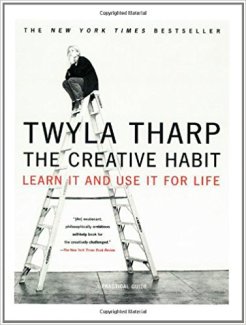 I don’t read many books by dancers, but then, while dancing is referenced a lot, this isn’t really a book about dancing; it’s a book about creativity. Twyla Tharp is first and foremost a practitioner. A renowned choreographer, she began her career in the mid sixties and has worked in both modern dance and ballet, and with a range of musical genre. If anybody knows a thing or two about starting with an empty space and creating something to fill it, it’s her.

Without wanting to get carried away, this is the book I would recommend to anyone in any kind of creative pursuit, writing, music, painting, indeed anybody who wants to be more creative about anything whether it be writing a report, developing a strategy or improving a staff meeting.

Each chapter is divided into two parts, beginning with Tharp exploring the core processes that sustained her over fifty years of choreography; problems she has run into, solutions she has tried. The second part of each chapter is a series of activities for the reader to try. Obviously, some of these will appeal more than others, it depends on what the reader wants to accomplish. I found this section immensely practical and helpful for exercises simply to assist you in becoming more creative, start projects or use specific tools to develop or test what you already have.

Let’s take an example, chapter six is about scratching (insert own jokes here). ‘Scratching’ is about finding an idea to get you going; scratching the surface of a thought to see if there more substance underneath. Tharp lists a number of ways people scratch, for example a visit to an inspiring place or a thought sparked by a scene in a book. This chapter isn’t about where ideas come from, it’s about how they come, and so she begins to define what a good idea is: “An adventure movie with two guys doesn’t quite qualify as an idea. Two guys and a bear does.” She points out that the big ideas are built on the foundation of lots of little ideas that have room to grow, not waiting for the thunderbolt to hit you, but going half way to meet it.

This stage of creating isn’t about seeing the end results. It’s about a snatch of dialogue, a handful of rough sketches or a musical motif. This is “bloodying your fingernails”; wringing the juice out of a concept. Tharp used psychologist Stephen Kosslyn’s process of generating an idea, retaining it, inspecting it for all its possibility and then transforming it.

The rest of the first section is devoted to considering sources; reading, people’s handiwork, mentors and heroes, nature. Ultimately however, it comes down to how you make connections to find something new.

Finally, she rounds off with five exercises; a mental warm up, a physical warm up, ways to read, a way to challenge yourself and taking a field trip. I’ll explain the last one. “It doesn’t matter where you live,” Tharp says, “If you have a goal in mind, you can turn any venue or destination into a valuable field trip… A mall, a blues club, a dairy farm, an open field -they are all worthwhile field trips if you have a clear purpose in mind. It’s your world. Own it.”

Almost certainly, no one will like every idea. For people who desire or are required to be creative however, you can survive without this book, but why pass over such a practical and easily readable lifetime’s expertise?

“Stories are the secret reservoir of values: change the stories individuals or nations live by and tell themselves, and you change the individuals and nations.”